The UNESCO Global Action Programme (GAP) on ESD is a roadmap to generate and scale up ESD action at all levels and in all areas of education and learning. The programme was launched at the UNESCO World Conference on ESD in 2014, as a follow-up to the United Nations Decade of ESD (2005-2014).

The aim of GAP has been to support UN member states in the realization of Agenda 2030 by reorienting education and learning so that everyone has the opportunity to acquire the knowledge, skills, values and attitudes that empower them to contribute to sustainable development. Read more

To further enhance ESD efforts, UNESCO launches a new framework called 'Education for Sustainable Development: Towards achieving the SDGs' (ESD for 2030) at a conference in Berlin, Germany on 17-19 May 2021. At the conference, SWEDESD is planning to arrange a side event together with the Embassy of Sweden in Germany and Institut Futur, on the role of ESD in enhancing equity.

From the 1th of January 2016, SWEDESD has been mandated by the Swedish government to coordinate the implementation of GAP in Sweden. Our mission has been to stimulate and follow up national actions with regards to ESD, as well as to participate in UNESCO’s international network for GAP.

As a first step, a national workshop for more than 100 active partners was held in Uppsala on the 7th of April 2016, to collaboratively define ESD-work in Sweden during the GAP period. The results from this meeting was included in a proposed action plan for ESD, that was sent to the Swedish government in July 2016.

On February the 8th of 2018, Swedesd in collaboration with the Global School (DGS) of the Swedish Council for Higher Education (UHR) organized “Learning and Education for Agenda 2030” - a national conference on ESD. The conference gathered 130 actors in the field of sustainability and education in order to share knowledge and to specify/prioritise comments to the Agenda 2030 Delegation and the government's work. It was also a follow-up to the conference Bridging the GAP.

In 2015, SWEDESD was appointed Key Partner within GAP and international Chair for GAP Action Area 3, Educators and trainers.

As a GAP Key Partner, SWEDESD has been collaborating with UNESCO and Southern African Development Community (SADC) Regional Environmental Education Programme (REEP) to build ESD capacity in teacher education institutions in Southern Africa and Southeast Asia. This includes the coordination of Sustainability Starts with Teachers, an ESD Action Learning Programme for Secondary Teacher Educators in Southern Africa, and a capacity building programme in Zambia and Zimbabwe. The work has been supported by ReSolve, a research partnership with the Environmental Learning Research Centre (ELRC) at Rhodes University and the Environmental Education Association of Southern Africa (EEASA) on scaling ESD on how to scale ESD activities.

As international Chair, Key Partner and Swedish Focal Point for GAP, SWEDESD hosted the first Swedish International GAP on ESD Conference. "Bridging the GAP - Educators and Trainers" took place in Visby and gathered researchers from all over the world to meet with practitioners in the ESD-field. The objective was to enable participants to share successes and challenges in scaling ESD, as well as to develop and further research in the field on a global scale, with the ultimate goal is to create a global community of research based ESD practice. As part of this conference, SWEDESD hosted the 9th Biennial Meeting of the International Network of Teacher Education Institutions (INTEI). 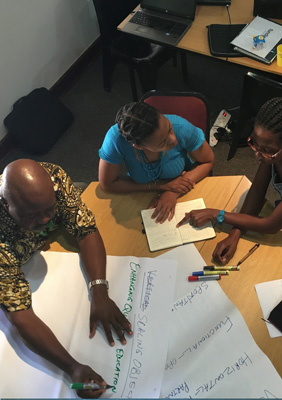